Lynn will be signing at the Brigham Young University bookstore during education week. 11 AM - 1 PM on Friday.

Danyelle and author Shannon Groves will be signing and participating in a fundraiser for Special Olympics at Mommy Shop 14870 Metcalf Ave. Overland Park, KS.

Lynn will be participating in a fundraiser to purchase books for special education classes at Bedford Junior High at the Barnes & Noble 861 NE Mall Blvd Hurst, TX 76053. Come from 10 AM - 6 PM for a book signing, cupcake decorating contest, art contest, and musical performances! 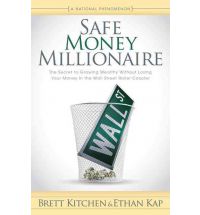 From Amazon:
The "Safe Money Millionaire" debunks the financial wisdom that has cost Americans trillions in losses in the stock market. Now more than ever baby boomers and Americans saving for retirement are looking for safety for their money rather than chasing returns on Wall Street. In this book we crush the financial myths ranging from 401(k)’s being a good place for retirement savings, to diversifying with Mutual Funds, to keeping your credit score high and getting a low interest rate. The solution is a predictable, easy to follow plan to growing wealthy without risking money on Wall Street, reducing or eliminating interest paid to banks and credit card companies, plus protecting yourself from taxes that can ravage retirement savings in qualified plans.


I don't have a degree in economics, and am not a financier. But everyone knows that financial news of the last ten years has made us more uncertain of the future than ever. Unscrupulous members of the financial world have made retirement savings evaporate, encouraged overspending on homes, and manipulated the stock market. Those who continue to be financially solvent worry about their jobs and how they will ever be able to retire.

Brett Kitchen and Ethan Kap have exposed the secrets of Wall Street. Using real life examples, they demonstrate how playing the stock market and traditional retirement savings are not the best option. Kitchen & Kap show you a less risky way to grow your wealth in such a way that it lasts at least as long as you do.

This quick read is easy to understand for everyone. Included are instructions to obtain a free financial blueprint designed especially for you.  That alone is worth far more than the cover price.

FTC Disclaimer: I received a free copy of this book, but this did not influence my review.
Posted by Unknown at 6:00 AM 1 comment:

I frequently visit with parents about labels. As an educational diagnostician, I am required to justify placing or keeping students in special education by giving them a label. If I don't identify a disability, I can't offer services.

Parents are concerned about labels. They are concerned that their child will be seen as a diagnosis, not a person. I try to explain that this is something the school is required to do, but labels have such a negative connotation, it's hard to overcome.

Labels can be hurtful. Educators rejoiced at the recent federal law that eliminated the term "mental retardation" on favor of "intellectual disability". Let's move away from labels towards eligibilities.

Eligibilities have many purposes. They get you services, both in and out of school. Educators and medical professionals get some information about why a particular student is struggling and what help he or she may need. Funding for many programs are based on the number of eligible students in different categories.

No one likes to think they've been labelled. We are so much more than one description. Let's start using the term "eligibility" so we can remember this is just something that gets people what they need.
Posted by Unknown at 4:23 PM No comments:

When parents discover their child has a disability, one of the most common reactions is to look for a cause. I know. I did it.

When my daughter didn't speak according to average developmental milestones, I blamed myself. I thought I hadn't talked enought to her, exposed her to enough language, or had done something else wrong. Later we would discover her hearing problems, which appeared intermittently. No one was at fault--just one of those things that happen.

Parents of children diagnosed with autism believe vaccines were the cause. This is because of the timing of the diagnosis. Despite proof that the study that incorrectly identified a link between autism and vaccines, the belief persists.

My mother still feels guilty because she gave me children's aspirin when I had chickenpox. I didn't have Reye's syndrome, and suffered no long-term effects. But she still feels guilty about a choice she made based on the best information available at the time. This is something mothers do.

Recently I tweeted about the results of a study that identified how many cases of autism were caused by environmental factors. One mother became incensed because she saw this as a scientific effort to blame parents, rather than research into prevention.

Scientists don't examine diseases to make mothers feel guilty. They do it to advance knowledge.

Many parents get stuck in a cycle of guilt. Some may over accomodate their child in an effort to "make it up" to them. They may vent their frustration to the professionals trying to help their youngster.

Guilt is not a productive emotion unless it keeps you from doing something wrong. Guilt kept me paralyzed for a time. Guilt did nothing to help my daughter.

After I made the choice to stop feeling guilty and help my daughter, she began to improve. Despite a later educator's belief that my daughter would not learn to read, she recently completed her freshman year at a leading university. Unmodified.

Get out of the guilt trap and you will be a better parent.
Posted by Unknown at 12:06 PM 1 comment:

"Plain and Simple Truths", a collection of 50 hands-on activities you can use to teach topics like faith and prayer. These concrete lesson plans come complete with scriptures, videos, and General Conference talks you can use to tailor the length of your classes. Perfect for Family Home Evening, Sunday School, or even adult classes, these methods help those new to the gospel, children, or those with disabilities understand challenging gospel ideas. Go to https://www.facebook.com/events/810895458965901 for blog tour information or to http://goo.gl/forms/t3ykbbWbQL to participate in the tour.

"(dis)Abilities and the Gospel"

Available at Amazon.com and Barnes and Noble

Occasionally I am given free books or other items to review or give away on my blog. This in no way influences my opinions.